Toward a Global Just Transition

Climate changeand the impact it is having on our everyday weatherhas become a topic of daily conversation. As the most recent climate confab in Glasgow demonstrated, a whole lot of people are doing something about it. But is it enough to make a difference?

Even with all of the commitments that countries made five years ago in Paris, plus the new pledges made in Glasgow, the world is still heading toward global warming of above 2 degrees Celsius (over pre-industrial temperatures).

After all, the commitments that countries have made to reduce their carbon footprints are all voluntary. Some countries have dramatically cut emissions. Others have done practically nothing. Most are somewhere in between, doing something but not quickly enough to have a serious impact.

These promises to stop using coal or to boost the production of solar energy are not sufficient.

Only a handful of countries have committed to transforming their entire energy infrastructure at a pace necessary to avoid catastrophic global warming.

The hopes for such a large-scale transformation, particularly in the Global North, often fall into the category of “Green New Deal.” Popularized first in the United States, where Franklin Delano Roosevelt’s New Deal was a state-led revitalization of the national economy, the Green New Deal is an effort to combine the reduction of carbon emissions with a commitment to Green growth. According to the plan laid out by Rep. Alexandria Ocasio Cortez and Sen. Ed Markey in the U.S. Congress back in 2019, the Green New Deal would replace America’s current fossil-fuel-based economy with one based on renewable energy, creating new housing, transportation, and manufacturing infrastructure, the reform of agriculture, and the generation of millions of new jobs to replace those in the old economy.

The U.S. plan hasn’t gotten off the ground, though elements have been incorporated in the Biden administration’s various infrastructure and budget initiatives. Other countries have also picked up the Green New Deal approach. South Korea’s ruling party put a Green New Deal at the center of its campaign in 2019 and won in a landslide the following year. The government subsequently adopted a Green New Deal as official state policy. The European Union is currently putting together a European New Deal that combines significant carbon emissions reductions with a Green stimulus package.

The “Green New Deal” language doesn’t resonate in a lot of countries, particularly outside the Global North. But the desire is still strong to combine efforts to reduce carbon emissions and address economic inequality (both within countries and between countries).

This is the genesis of the Global Just Transition project at the Institute for Policy Studies. With this project, we are tracking the progress of Green New Deals and similar initiatives around the world. We are looking at the implications of just transitions at the multilateral level around issues of debt, trade, and financing. And we will bring together activists and policymakers to discuss how to advance these efforts at a global scale.

The purpose of the project is not simply to inform but to identify concrete transnational projects. Toward this end, we are working with African civil society groups on how to address Chinese financing of fossil fuel projects on the continent. We’re partnering with the Pacto Ecosocial in Latin America to push back against the policies in the Global North’s Green New Deals that simply outsource carbon-intensive manufacturing to the Global South. And we’re exploring ways of amplifying the degrowth narrative in mainstream discussions.

So, yes, we’re talking a lot about the weather. Join us to do something about it. www.fpif.org/global-just-transition

John Feffer is director of Foreign Policy In Focus at the Institute for Policy Studies. His latest book: The Pandemic Pivot and his latest novel: Songlands. www.fpif.org | www.johnfeffer.com. 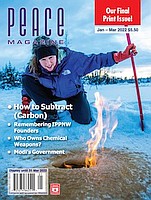 Search for other articles by John Feffer here