I sometimes ask high school students what comes to mind when I mention the word “nonviolence.” They usually define it as “minimizing the frequency of violent incidents.” The “non” prefix means to them a moral-legal judgment against non-acceptable levels of violence.

Young people are more likely to engage in social action if they see it as morally and legally relevant. Acting against non-acceptable levels of violence gives one a sense of moving to a higher sense of oneself. This is especially transformational when done by a group of people. After witnessing such conflicts as the Irish civil war, educator Lynn Davies opined that conflicts were disruptive, yet they furthered youth learning and their engagement in the democratic process. She suggets that teachers not protect youth from experiencing conflict. Instead, they should work with them to convert conflict into creative processes through self-organizing for social action.1

As I am now visiting the South Caucasian country of Georgia carrying out a training on peace education, An example of youth’s engagement in creative conflict transformation happened a couple of weeks ago in response to the June 13th flash flood in Tbilisi, which killed twenty. Two thousand youths assembled in three locations for what became ten days of flood relief and rehabilitation. Within a few hours, with the help of social media, they organized themselves into groups offering rehabilitation for affected families, flood clean-up, and the restoration of basic civic life. These frontline youth linked with many thousands of other youths to carry out this work. The ones in the trenches were those who appeared anarchical, with tattoos flowing over their shoulders and arms and pierced faces. Yet they were the ones who stepped up to do the difficult work. By the end, the youth who were engaged in flood rehabilitation numbered around 35,000 —this is in a country of less than four million. To honor these young people, a rock concert sponsored by the Tbilisi arts community is planned for July 15.2

In Canada, one unforgettable example of youth engagement was the 2012 protest by Quebec students against a tuition hike. Through nonviolent social action over many months, these young people moved the government toward enabling students to continue their higher education without taking on more debt. Whether relief-work in Georgia or the Quebec tuition protest, young people taking up social action were learning nonviolence ways of solving problems with the state.

Though these social actions are salutary for the public at large, many governments distrust youth engagement and the use of nonviolence. Demonstrations against the high costs of electricity in Yerevan, Armenia this week evoked a violent response from the police. The youth continued and their presence mushroomed into a larger nonviolent movement.

This positive role of youth is not being given the media attention it deserves. Rather, the mainstream media more often portrays youth as spreading violence and disrupting civic life. This conflation of violence with nonviolence does a disservice to positive youth engagement in civic action.

Nonviolence provides an alternative culture of politics where dissenters and policymakers engage in dialogue. In the land rights movement in India (covered in Peace Magazine, Oct-Dec 2008), thousands of poor people walked in foot-marches in 2007, 2012 and 2014. They were able to create dialogue and genuine negotiation with the central government. This happened not only because of the mobilization of large numbers of people but also because dissenters and policymakers shared a political culture of nonviolence that allowed for power relations to be changed.3

The long history of organizing through nonviolence in India began with Gandhi and the Freedom struggle. It continued with Vinoba Bhave in the Sarvodaya Movement in the 1950s, and with Jayaprakash Narayan’s party-less democracy in the 1960s and 1970s. These have left an indelible influence on the culture of politics in India, which even today adheres to “intentional nonviolence.” This political culture evokes emotional experiences, particular cultural idioms and ideology, and uses organization as a tool. As a result, both the people and the state understand nonviolence as an acceptable form of political action.

Martin Luther King used nonviolence as a form of political action in the civil rights movement in the 1960s but it is debatable whether it became an enduring culture of politics. Vaclav Havel in Czechoslovakia, Gamsakhurdia and Merab Kostawa in Georgia, and others in former states of the Soviet Union all used nonviolence in the process of the breaking up into new state formations. Yet it seems that in most countries, nonviolence as a political culture has been overtaken by the politics of violence.

Gene Sharp and his followers have given nonviolent action a set of usable techniques and broader application—particularly in pro-democracy movements in the former Soviet states and Arab Spring countries. These strategies and tactics form a useful guide for dissenters, but not for the state organizations or power holders. This is not a culture of politics based on nonviolence, from which to advance social change. Consequently nonviolent strategies and tactics may fall short of being a Gandhian form of political action.

Gandhi’s notion of nonviolence is unique (as say, compared to Buddhist nonviolence), and much of my discussion is based on it. For instance, for most people peace is a goal—but a distant dream comparable to Sisyphus’s struggle to roll the stone up the hill. In this paradigm, people are expected to pursue peace but not to live nonviolent lives or build nonviolent societies. Gandhi’s argument uniquely encourages consistent conduct that gradually removes physical and psychological force, promoting empathy, compassion, and love.

Building a perspective that minimizes the use of force means cultivating love. This is done in various ways. One is by using suffering in nonviolent social movements to win over opponents by compassion.4 It minimizes violence at the personal and the group level. Gandhian nonviolence is not just inner peace that retreats from a structurally violent world. Rather, inner and outer nonviolence are interdependent. Finding peace within oneself has to be balanced with peace in intragroup relations (such as family or community), and this has to be consistent with the way one engages in the work environment, the economy, and society. It is also to be balanced with peacebuilding at the global level. One cannot find inner peace if there is poverty for others.One can achieve nonviolence only if the means are also nonviolent. Using unethical (violent) means to get an ethical (peaceful) end is not sustainable. One is intentional in carrying out nonviolence in every act of life.

In September 2014 in Madurai, India a two-week training was conducted on nonviolence. This was part of a larger initiative showing how to apply concepts of Gandhian nonviolence to other countries in peacebuilding situations. The thirty participants (all between 22 and 34 years old) had come from twelve countries and four language groups. They all had backgrounds in education or civil society organizations; 19 were males and 11 were females.

After the training, Neil returned to Germany as a part-time peace educator in the public schools and has worked to help children with violence prevention and to set up peace clubs. He describes his teaching as practice sessions where young people look at various conflicts and seek to preempt them before violence becomes entrenched.

Once conflict becomes uncontrollably violent and solidified, conflict management tools are required. This, however, does not necessarily lead to a culture of peace. Instead, it may only prevent destructive violence. A better chance of obtaining peace comes from de-escalating the violence before it occurs.This connects the action with the goal of achieving peace.

During follow-up sessions Susan, the second participant, began to see in her organization’s work the intentional application of nonviolence in social protest and action.The core strength of a movement is not the use of physical force by large numbers of angry people. Instead, the strength consists of people who willingly take on suffering and build solidarity as a way of exercising moral force in politics. These are means of changing the culture of violence to a culture of nonviolence.

Much has been written about the differences between “negative” and “positive” peace. Negative peace is the absence of war, whereas positive peace consists of building conditions for peace. Yet if negative and positive peace are pursued in a culture of violence, the work may fail. Instead, we propose a culture of nonviolence that emphasizes: 1) civic and social action, 2) an alternative culture of politics, 3) consistent conduct that gradually removes physical force; 4) an education about causation that minimizes potentially uncontrolled violence; and 5) building solidarity among people. These are all ways of changing the culture of violence into a culture of nonviolence.

Jill Carr-Harris is a Canadian nonviolence organizer based in India for decades. 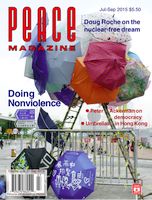 Search for other articles by Jill Carr-Harris here