In a courtroom, two sides of an argument battle it out to uncover something close to the truth. But in a partisan and polarized Parliament neutrality is rare, and even humanitarian issues get short shrift. If the public or experts are asked to offer their views and evidence, it’s not certain they are seriously listened to.

Take the discussion of Bill S-10, the Canadian draft bill to implement the cluster munitions convention (the CCM). Almost everyone agrees that cluster bombs are problematic. Wide dispersal and a high rate of duds ensure a statistically predictable impact on innocent civilians during and after conflicts.

Canada has signed but not yet ratified a treaty that unambiguously prohibits use, stockpiling, transfer, manufacture or trade in the weapon. The treaty does allow a signatory (like Canada) to cooperate with a non-signatory (like the United States) in a combined operation, but under no circumstances does it permit Canada to violate the basic prohibitions. An ally could still use the weapon in the same conflict but we can have nothing to do with it. To the contrary, Canada is obliged to try and deter allied use.

Activists saw the “interoperability” clause (Article 21 of the treaty) as flawed for obvious reasons. We wondered: Would (winking and nodding) Canadian Forces be enabling Americans to carry on, business as usual? The treaty overall is a good treaty, and in some ways (provision of victim assistance, for instance) is precedent setting. Still, within Bill S-10, (the bill that will make the treaty law within Canada) the government will be explicitly allowing Canadian soldiers to direct, request or authorize use of cluster munitions while fighting on attachment, exchange or secondment alongside an ally that opposes the treaty. The faulty clauses are by far the worst segment of legislation proposed by any signatory.

The Harper government wants ratification legislation but they do not support the core treaty provisions towards a comprehensive ban. When John Baird appeared before the Senate’s standing committee on foreign affairs (SCFAIT), he said that cluster munitions were “terrible and horrible weapons and should be destroyed.” He said he hoped that Canada’s support for the treaty “puts a stigma on their use and reduces their use by non-state parties.” Every Senator who spoke in committee (Conservative and Liberal) also gave the impression they shared this position. Many Senators were well informed (including Liberal Senators Romeo Dallaire and Elizabeth Hubley, and Conservative Senator Suzanne Fortin-Duplessis, whose son lost a leg to a landmine.) But Conservative Senator Pamela Wallin tried to portray the draft Bill with its conflicting exceptions as a practical expression of Canadian sovereignty in defence of shared Allied military objectives.

Warren Allmand, a former Liberal Solicitor-General, and current president of the World Federalist Movement-Canada, in his testimony to the committee, introduced an open letter signed by 27 legal experts, mostly Canadian international law professors. The letter concluded that the offending clauses within the draft bill were so at odds with the treaty text and intent, that they had to be removed or drastically changed. Three former Canadian disarmament ambassadors signed the letter, as did Virgil Wiebe, an American legal scholar who has authored definitive commentaries on the treaty.

Listed also is Earl Turcotte, who resigned his position as leader of the Canadian treaty delegation at the Department of Foreign Affairs, in protest over how the government was re-interpreting the treaty. Turcotte knew what he was talking about. He outlined to the Senators why the interoperability clause was written the way it was. His testimony can be found online and is sizzling.

At one point, this exchange between Senator Wallin and Earl Turcotte:

Mr. Turcotte: “[…] We cannot control the actions of non-party states. That is the point. What we can control, and we have said this time and again during negotiations, are our actions and our choices. What is it that we will do? Will we put a Canadian pilot in a US airplane and say, ‘You can go and use cluster munitions’? Will we allow Canadian artillery personnel to use—press the button for—cluster munitions? Will we allow a Canadian commander like Lieutenant-General Charles Bouchard to order the use of cluster munitions by non-party state forces? I think those things are well within our control, and the answer to that should be no.”

Senator Wallin: “[…] I also do not want to be in a circumstance where I might inadvertently put Canadian lives in danger or, furthermore, risk prosecution when they come home for being involved in actions to which they were not directly a party to, or to which they could not realistically stop.”

Mr. Turcotte: “Senator, there are many ways to fight a war, and I have great faith in our military. They have used alternative means of waging war when they have had to. I am sure they can find ways to continue to do what needs to be done militarily and to continue to cooperate with our closest friend and ally effectively without using a weapon that is indiscriminate and inhumane.”

A range of amendment options was offered to the Senators. The bill could delete the offending Section 11, and add language that requires Canada to press allies to avoid cluster bomb use. As several witnesses pointed out, the New Zealand legislation is very good and we could model our own on that.

In the end, frustrating those who encouraged Senators to “fix the bill,” the committee voted against all amendments: Seven Conservatives opposed and five Liberals favored each proposed change. In weeks of deliberations, more than two dozen witnesses had appeared and requested changes, including the International and Canadian components of the Red Cross, Mines Action Canada and the Cluster Munition Coalition. The recommendation of the standing committee chair, Senator Raynell Andreychuk: “Your committee has … examined the said Bill and now reports the same without amendment.”

As highly abrupt that statement is, you have to wonder how many Conservative Senators may have winced at that result. Job done, the bill headed from committee to the Senate for vote, where it passed without amendment.

In the Senate, both Hubley and Dallaire appealed for yet another look at changes. Dallaire was adamant:

“We nearly wrote the whole damned convention and now […] we are literally coming out as an outfit that talks out both sides of its mouth. We are saying, “No, we will not use them but, by the by, if we do have people involved, we will let them use them.” Is that supposed to give us the warm, fuzzy feeling that we are applying the spirit—not just the letter, but the spirit—of the convention?”

What Canadian legislation says— particularly in light of our country’s legacy with the Ottawa anti-personnel landmine treaty—matters a great deal. A troubling precedent will be set if we fail to change the Bill.

For that reason members of parliament could in good conscience vote against the current ratification draft, even if the government majority carries the vote.

That’s a painful but sensible call for those of us who have fought long and hard to see a good treaty made the law of the land.

Robin Collins is on the Council of the World Federalist Movement-Canada. He is a former Chair of Mines Action Canada. He was a witness to the Senate standing committee in October 2012. 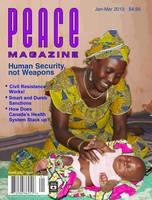 Search for other articles by Robin Collins here